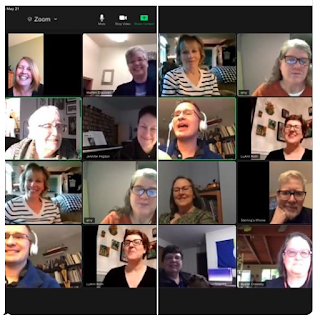 Having students who move bravely out into the world is a wondrous thing– easily enough reason to not second-guess the effort invested in teaching. My parents went straight from their graduate degrees in flute and oboe to university teaching posts– so, the meter started running immediately, and the students who passed through their studio doors have spread an exponentially larger net than I can manage to cast, having started much later with my own teaching.  Mom just hopped on a Zoom call with several [once and future?] students, and their smiling faces are moving testimony.

But every single student leaves me agog with wonder. Maybe launching fewer generations has some up-side, in that there’s a sense of urgency that I learn all I can from every encounter. I’m only four years into full-time teaching, two spent at the University of Missouri at Columbia, and two spent at the Jacobs School of Music in Bloomington, Indiana (where I was a student myself). That modest number of students is for me still absolutely sizzling with discovery and inspiration. I imagine them all, as I walk along my country lane, with curiosity, and emotion– some few have reached out to stay in touch; most have not, though when I email out of the blue, they’re always ready to fill me in on their current vantage points.

I’ve had mixed experiences reaching out to my own teachers– nothing negative, but I’m surprised at the lack of response from a few. I’ve sent messages of gratitude, and once deposited a bottle of champagne outside a Viennese apartment, with no idea if it ever reached the intended mentor. No hard feelings– I’ve no way of knowing what each teacher can afford, in terms of time and attachment. A teacher with a track record as long as my mom’s might well be inundated with shout-outs. I can tell that making the gesture of thanks helps me feel I’m staying accountable, so that’s a mission-accomplished moment.

How exceptional it is, then, to have a truly active ongoing discussion with a student from an earlier chapter. I have one of those, with a singer who has moved bravely out into the world to teach music himself. The reach of the net he’s now casting will be immeasurable. We just batted around (via text message) the idea of dogma as it relates to voice studies. He’s on a faith journey, simultaneously with managing to unpack illustrations of sound and musical organization for way too many elementary students. I can count on him to be patient while I unpack my own versions of those illustrations, and to reply in counterpoint with unexpected resonances from his own current ponderings.

My pedagogy in the voice studio is steeped in acoustics and physiology. A new student asked me incredulously “…did you make this up?…” Which was a triumphant moment, knowing that I could answer: “not one word of it.” Voice teachers are at home in a unique domain; we’re all familiar with the modus operandi that we’re after the same thing; we just pursue it using various vocabularies. It’s the perfect profession for artists who traffic in love potions, folk tales, stage sorcery– because it still accommodates magic. I’ve not encountered a single researcher who is dismissive of these alternative vocabularies. I suspect that every teacher must believe they have a particularly potent method– otherwise, they’d not have chosen it. Does this constitute a dogma, a set of principles laid down by an authority as incontrovertibly true [thanks, Oxford Languages]? Dogma denotes not only authority, but also inflexibility. And an amount of narrowness: this way, not that way.

So, my ‘particularly potent method’ prides itself on fostering a substantial amount of awareness– and takes pains to detail how there is no single coordination that serves all sounds, on all frequencies. Am I carving out my own inflexible dogma, by advocating for customization according to very specific conditions? Am I campaigning for invariable variations? My conversation this morning posited an inversely proportional relationship between dogma and awareness; that growing awareness defuses dogma, and adherence to dogma requires that we voluntarily dampen our awareness. More seasoned teachers than I have probably teetered back and forth in dealing with numerous students. Learning must have to do with deepening awareness; teaching must have to do with some amount of conviction, some degree of dogma.

My sustained (and sustaining) teacher/student dialogue has drawn on an interest of his in recent months, namely St. Augustine, who wrote: “He who jubilates does not utter any words, but a joyous sound without words: for it is the spirit lost in joy, expressing it with all its power, but not arriving at a definition of its sense.” Augustine is referring to melismatic vocal writing– but also to effective communication, and potent teaching. I think my mother’s happy students are there. Past dogma; past awareness.